As one season wraps up, most teams have already turned their focus to next year. And with that, teams are agreeing on their goals, and hopefully setting some plans in place on how to achieve them. It is important, however, to account for some difficulty along the way. Those who accept that, and those who prepare for it will be better off. And those who LOVE the challenge, will be the likely be better off yet. – Cheers, Brian Chick.

Anybody who thinks they’ll accomplish anything noteworthy without a bit of conflict, bad luck, struggle, opposition, or most importantly, hard work, is going to be sorely disappointed. All of our greatest moments, in real life or fantasy, came following struggles over the course of time, where the hero faced problem after problem, obstacle after obstacle, barrier after barrier…

The fact the our hero FACED the problems, and eventually triumphed, is what makes the story worth hearing.

If the story of Rocky was just “This guy wanted to be a boxer, so he tried it out and beat the champ,” it wouldn’t have won any Oscars (and yes, Rocky won three Academy Awards). If Jackie Robinson’s story was just “This guy was good at baseball, so they let him play in the majors,” he probably wouldn’t be a household name, nor would his number be retired across the entire league. Every story you’ve ever loved is interesting, exciting, moving, and powerful because of adversity.

Alarm bells might be ringing, because we’re trained to think that adversity is a bad thing. “Obstacles, opposition, and failure are to be feared,” we think, “We can’t celebrate the things that stand between us and our dreams!” Of course we can! That’s what makes an achievement and achievement. The fact that it wasn’t easy and many factors were against you is what makes it special. Adversity is everywhere, and it’s going to try to bring you down.

I’m not trying to scare you. I’m trying to prepare you.

At the end of the day, if you want your story (ie – life, pursuit, goal, ambition) to be interesting, noteworthy, or heroic in your own way, it is not likely that you’ll walk up to the challenge and crush it the first time you try. If a goal is worth chasing, it’s because it’s a stretch. It’s out of your grasp, abilities, sensibilities. You can’t possibly achieve it… yet.

Yet. Three letters make so much of the different. It’s not uncommon for teachers and coaches to ban negative talk like “I can’t…” or “I don’t…” when working with athletes, as a motivational tool. Positive thoughts lead to positive results. While that’s a hard point to dispute, it misses the point that the result is strictly an outcome of the process. To improve the result, maybe we need to change the way we think about the process. And that’s where “yet” comes in. 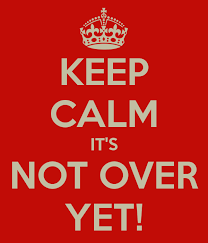 Tack those three little letters on the end of negative statements, and they suddenly become your ticket to improving, learning, and tackling the aforementioned adversity. YET makes it okay to fail now, and introduces intention to move forward. If an obstacle pops up, and it surely will, put it on the list of things you haven’t beaten YET.

Without it, failure seems permanent. Obstacles seem treacherous, and our goals seem forever out of reach. YET is about embracing the challenge, rather than allowing yourself to be defeated by it.

In writing your epic story, don’t cut it short by forgetting three little letters. Even when he overcame all those obstacles, ran up all those stairs, and punched all that meat, Rocky didn’t beat Apollo Creed… yet. *SPOILERS* It took Rocky another movie, more running, more punching, and an awesome pump-up song (“Eye of the Tiger” – Survivor), before he beat Apollo. Perhaps most importantly, he needed the right motivation.

So when you write out your plans and make your goals, make a list of all of the things that are going to get in your way, and call it “Things I haven’t beaten yet.” And remember, it may take a while, and likely more effort than you expected to put in… If it doesn’t happen right away, be prepared to come back in an epic sequel.

For more on this topic, check out the TED Talk from Carol Dweck on “The Power of Believing You Can Improve.” Also, much thanks to great sessions from Kyle Paquette and Adam Kingsbury who have frequently presented on sports psychology topics at various Curling Canada events. Much of the above was based on these fantastic sources!